This is Part II from the Nike media preview this spring, complement to my footwear review here. 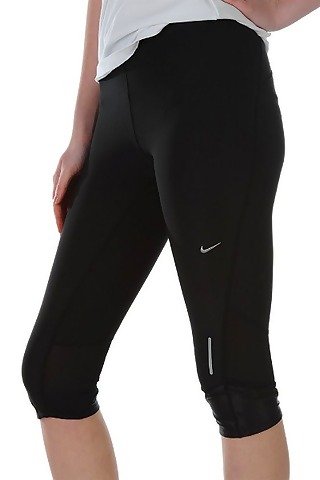 What: Running tights are hard to get right, and this item is where the higher price point is worth it. I have another pair of lower-end running tights that force me to wear underwear with them lest I make my lady parts angry. These running capris don’t. They’re made of polyester and spandex, which wick away sweat like it’s not even happening, and the seams are nice and flat. The separate, flat crotch area is breathable. The pair I received is technically a size too big, but it still somehow fits like a dream. The zippered pocket at the back waist is big enough for a key, lip balm and small pepper spray, yet it’s flush and flat (without those things, I mean). Airy mesh covers the back of the knees. The elastic waist is comfortable; the specs say there’s an interior drawcord, but mine doesn’t, for some reason. I’ve put this through the wash several times already. The two reflective strips on the sides of the knees are showing a little wear, but the rest of the capri looks and functions like new.

Pass up or play: PLAY 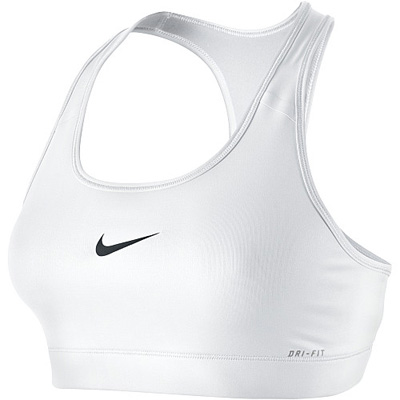 What: I was excited at the preview to see bras constructed to hold even the most ornery breasts in place. That was the Nike Swift U-Back Bra. What did I get in my test bag? This standard-issue pull-over in size gigantic. Not only does this pliant, ubiquitous style of sports bra not help a cup size over the perkiest of Bs, the size ensured that I wouldn’t even be able to test the thing without getting two black eyes.

I politely asked a Nike media rep if they had a bra with more support for me to test, and one in the size I requested. I got the same bra, but one size smaller (size mega instead). At least it was in the more attractive “carbon heather” gray. I’m at least able to wear this one. To lift weights. Very slowly.

Pass up or play: Tiny boobies = PLAY; all others = PASS UP