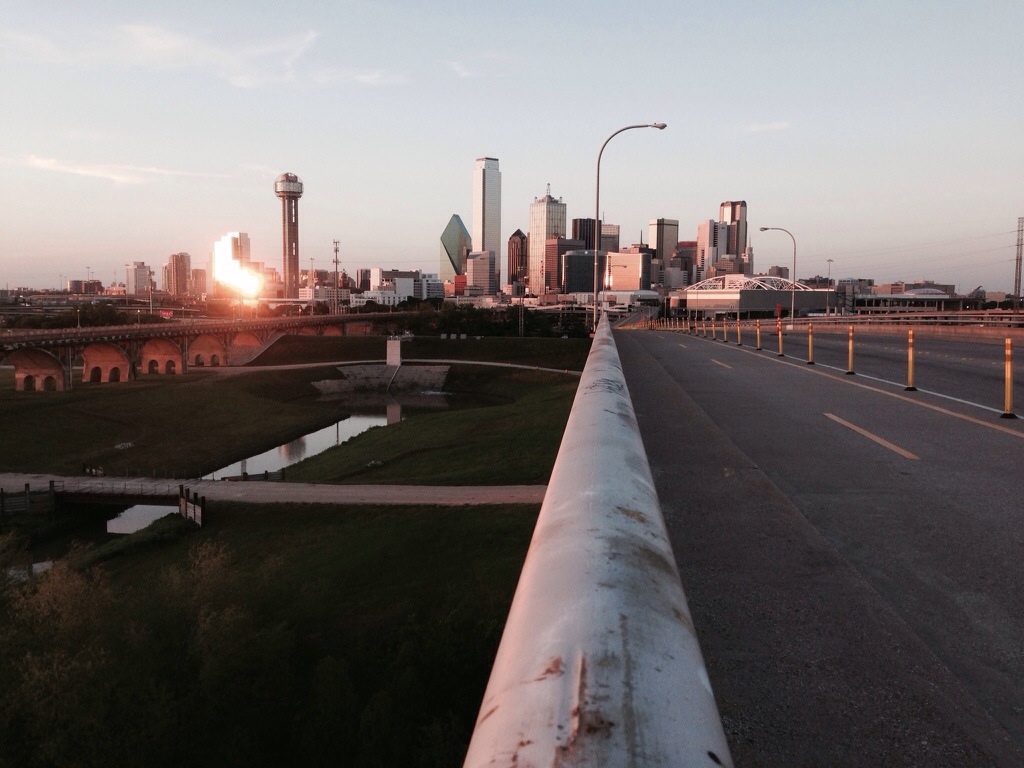 Running is the only area of life where I have ADD. I’ll just stop running if I have to look at the same thing over and over, back to back. Can’t do it. I need something different just about every time. Maybe you’re the same way.

But by “different” I don’t mean bizarre with never-before-seen sights. Just a few new-to-you routes to throw into your mix that happen to be among my favorite. Try: 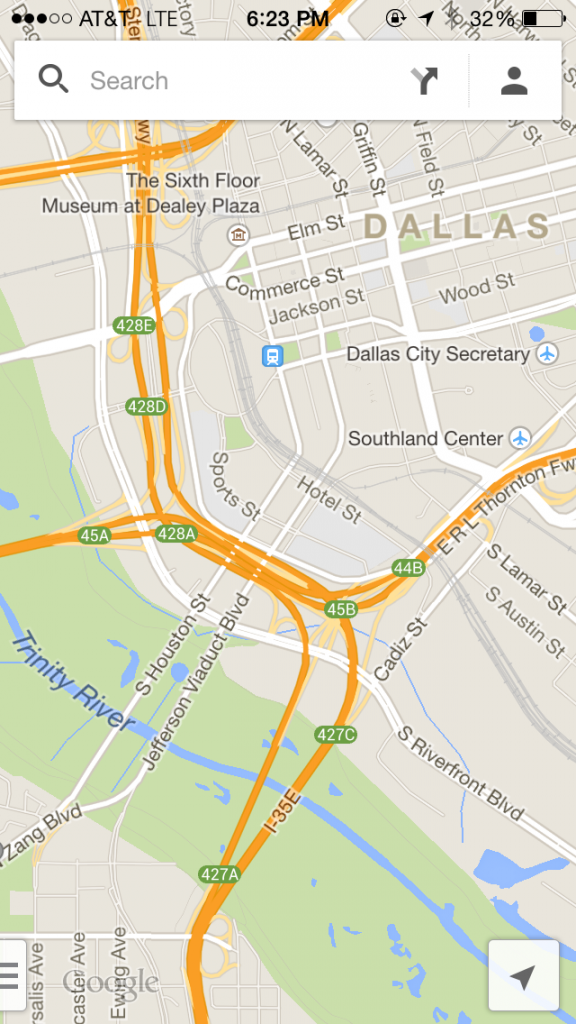 • Park at: There are few parking spots at the small Oak Cliff Founders Park on Zang Boulevard where the viaduct (bridge) starts, or you can park at Lake Cliff Park a bit further down on Colorado and Zang.

• Why: About a year ago or so (?) the city of Dallas put in dedicated bike lanes that included the bridge, and it has been awesome (read about  it here). Big hugs to the Bike Friendly Oak Cliff folks for their work on that. The bikes lanes mean safe passage for cyclists and pedestrians between Oak Cliff and downtown Dallas. Before the bike lanes, pedestrians could walk the bridge. But that meant walking on a very old concrete sidewalk-ish thing a little too high up for my liking on the very edge of the road where, on extra windy days, I felt like I was going to meet my end at the bottom of the Trinity non-River.

• What you’ll see: The bridge allows you to take in the magnificence that is the Dallas, Texas, skyline growing bigger and closer with every step. The Trinity non-River corridor is actually really open, green and gorgeous, and the bridge offers a nice view. If you’re running at sunset, just as the sultry-warm light slips slowly, reluctantly behind the Trinity and bathes downtown’s buildings in gold, just try not to be overwhelmed.

Where: On Colorado Boulevard from Beckley to North Plymouth Road

Distance: Strictly speaking, about 2 miles, or 4 miles down-and-back. But the mileage possibilities if you run in and around adjacent neighborhoods are pretty endless.

Park at: Closest real street parking is Lake Cliff Park again. But you could feasibly parallel on a nearby residential street, and there are a few spots on the street near Methodist Dallas Medical Center.

Why: Because you want the most butt-kicking hills that Dallas has to offer on concrete and you want to look at the city’s nicest authentico, non-McMansion houses.

What I’ll see: The run I’m really talking about actually starts either at Colorado headed West at Methodist hospital or at Greenbriar headed west from North Zang. That whole cluster of residential neighborhoods, which includes most notably Kessler Park, will do you right. If you need more mileage than a 4 mile down-and-back, then good; run in and out of all the side streets you can, slowly and eventually making your way west to the golf course. The inclines will kill you, and you’ll see some truly unique, tree-covered ‘hoods. When you get to the golf course, you’ll be rewarded with even more scenery and a mighty fine view of the Dallas skyline. 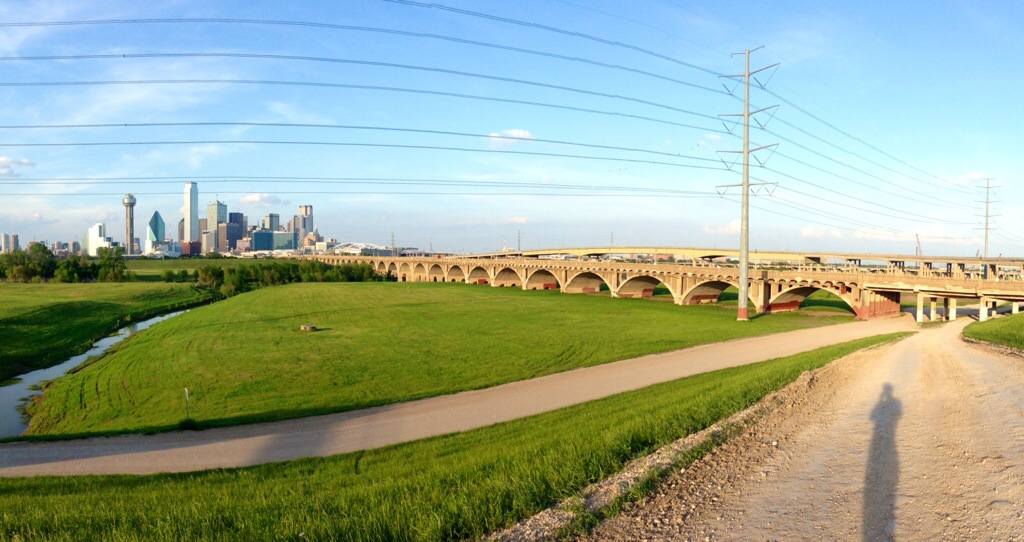 Downtown Dallas and the Jefferson Street Viaduct, from the Trinity River Levee

Where: Hop on at Zang Boulevard where it ends and the Houston Street Viaduct begins.

Distance: This is a major guess. Something close to .75 miles, 1.5 down-and-back.

Park at: Same as No. 1 above — There are a few spots to park at Oak Cliff Founders Park on Zang where the bridge starts, or you can park, again, at good ol’ Lake Cliff Park up the street.

Why: The closest thing to a trail run this close to downtown Dallas.

How to get there: Notice that two viaducts run parallel to each other: Jefferson Street Viaduct and Houston Street Viaduct. At this writing in April 2014, the Houston Street bridge is closed and blocked for installation of street car tracks. So this is what you do: Park at either park I listed above. Walk/run to where the bridges appear to take off. Keep to the left of the Jefferson Viaduct. That little street will meet up soon with the mouth of the Houston Street bridge. On the left, you’ll see where you can hop over the short barrier on the left/west side of the street, and you’ll see that it’s basically an unpaved but trodden trail along the edge of the Trinity basin. It’s what Google Maps apparently calls “Perimeter Road,” which is weird since it’s not an actual road. But whatever. You’ll also see that a little work has been done thus far to try to civilize the basin itself, but not much yet, thank goodness. Run that levee west all the way to Interstate 30 and back.

On the other, north side of the corridor, Google Maps calls a stretch “Trinity Levee Trail.” I’m sure it’s nice and I’m sure there is a spot you could park at and launch from to get there, but I haven’t tried that yet.

You might see another person or two doing the same thing you are, and some folks like to take advantage of the steep incline the levee offers by killing themselves up and down it.

You can feasibly run around the entire basin itself like a banshee, but remember that this is kind of an isolated area. As my husband says, “keep your head on a swivel.”