Haha — Encouraging iphone notifications from @RunKeeper and threatening ones from @CARROT_app pic.twitter.com/Ua1bBW2Kis 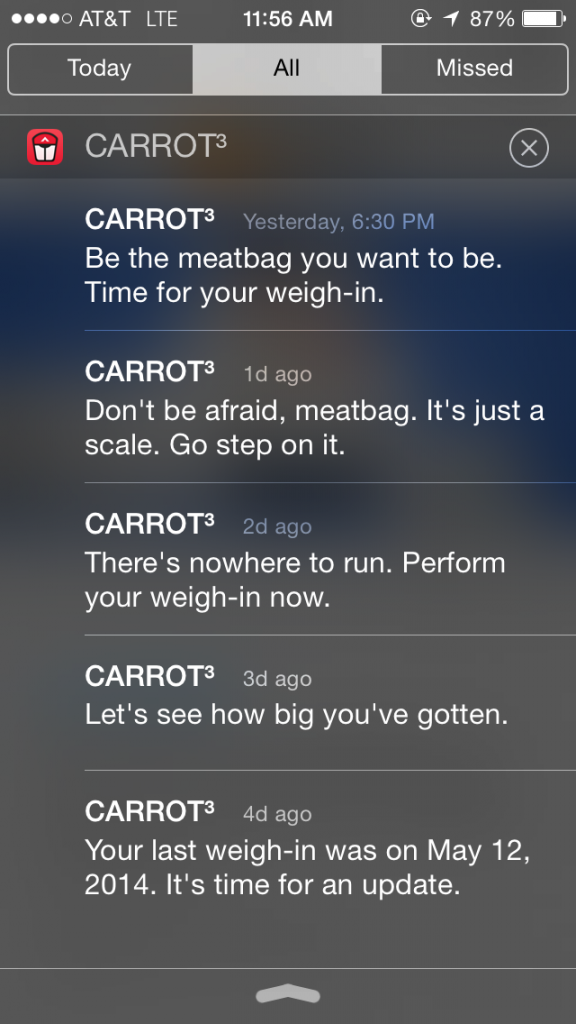 While walking to my Jefferson Viaduct launch spot a couple of weeks ago, my phone dinged its familiar notification ding. I looked down, and it was from the Carrot app I had downloaded recently — giving me major attitude: “You’re going to step on that scale, and you’re going to like it.”

Carrot isn’t a running app, but it will shame you into running just a bit harder. And by “shame” I really mean that it will keep you aware of your fitness goals while giving you a severe amount of lip.

The judgy Carrot universe is growing fast, apparently; what I downloaded not long ago was just the “Carrot” app: I tap in my weight goal, then log my regular weigh-ins at the behest of rude iPhone notification reminders like “Time to get on the scale, meatbag.” Now what’s on my iPhone is Carrot Fit. There’s a separate app for purchase called Carrot To-Do (along with something called Carrot Alarm), which also helps you stay on top of your goals while cracking you up. 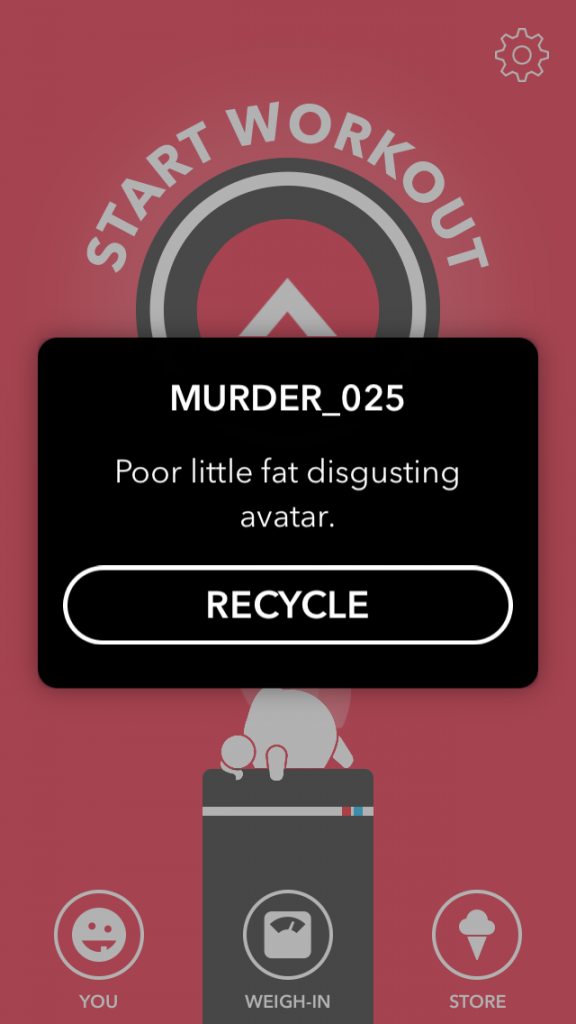 Carrot Fit now offers workout plans and even a workout costume for your fat lil’ avatar ($0.99) through in-app purchases. You get a few workouts for free, and you can purchase a booster pack for $1.99. If you quit on a workout, get ready to be judged.

My favorite part? If you tap your fat lil’ avatar, it sends a bolt of electricity to smoke her to death. Unexpected and hilariously grisly. You can do it over and over again, and the app will judge you with increasing indignation.

Usefulness? At first I downloaded it as a simple weight tracker that gave me giggles. Now I’ll have to try out a couple of the workouts and see if Carrot Fit is just funny or funny-serious.

Update: A few days after I wrote this, I ran across a DailyDot tweet that made me a) think of Carrot Fit and b) roll my eyes. Maybe the jokey-faux-shaming is rough on folks with eating disorders? I don’t get it. It seems like fat-embracing, not fat-shaming.