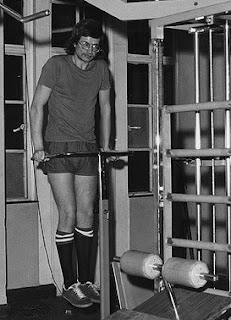 I need your help! I’m doing a story about how to choose a fitness center and what to do once you’ve joined. You can answer in the comments here or on Facebook. The story is aimed at people who are out of shape and/or are new to fitness. Now, fitness/the gym scene/running/etc. have always been a part of life for some of you — I have a question for you in a minute. But here are a few questions for those of you who discovered things later as an adult:

• What did you wish you knew when you joined a gym for the first time?
• Were there any instructions or answers that were difficult to get from staff?
• What classes, equipment, services, or other aspect was the most intimidating?
• After you joined, did you discover or experience something that made you wish you’d joined another gym instead?

Now for you fitness lifers (or anyone who’s joined a gym):

• What are your top five factors in choosing a fitness center? For instance, four my must-haves are proximity, fairly low-cost dues, an indoor track and yoga on its group exercise schedule. If the place has a wet sauna, too, I’m there. What about for you?
• What gadgets or programs do you use to keep you on top of progress?
• What do you do to motivate yourself to get in the car and go to the gym?

I look forward to your insight! The story is due to run the second week of January as part of a health package in The Dallas Morning News.

I’ve been following the barefoot running trend for a while, and I’m intrigued. Maybe it’s because I’ve always been a shoes-off kind of girl to begin with, and because my toes can function like most people’s fingers. I’ve always taken pleasure in tugging at the grass with them while sitting outside, or in raking the dirt with them, trying to decide if I think the granules feel rough or smooth. My bare feet have aided in my laziness, too. Dropped a pair of underwear while carrying an armload of clean laundry from the dryer to the bedroom? No problem, that’s what toes are for. 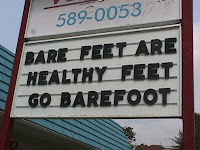 But running — I’m not so sure. I’ve technically run barefoot before, by default because I needed to run and happen to not have shoes on at the moment. I admit, it feels pretty fantastic. A completely different sensation than never realizing there’s this stuff called “ground” beneath the sole of those perfectly-engineered running shoes. My feet sort of register it like that delicious excitement a kid gets when she’s left alone with a box of donuts, television or the cute next-door neighbor boy after being over-protected all the time. Freedom.

So I saw this Active.com story on Twitter today about running barefoot and became re-intrigued. My whole life, running shoes have been the norm if you want to, well, run. Which is why it’s never dawned on me that running-shoes-for-running is a pretty recent phenomenon. I’d also never thought about the fact that the human foot has quite a few more years of structural engineering to help its owners run than do Nike or even (blasphemy!) Asics. Thing is, I’m not so sure that just because the human foot has been around a while, that means it’s made for the kind of running we do today, which is pretty recent, too.


Like the kind where you run nonstop for no good reason. Enter Barefoot Ted, who does just what his name implies. Not just 5Ks, either — try marathons and ultras, be-footed in nothing but his bare tootsies and sometimes in the bizarro-looking Vibram FiveFinger footware for a bit of protection (which I see on the Katy Trail from time to time). Ted had major back pain until he switched to running barefoot, and now he’s an evangelist about it.

Besides running nude-footed or with fancy FiveFingers, apparently you can also wear minimalist hurache sandals if you’re worried about glass or hot pavement (shown in the vid above — what’s up with the rooster and the “Smells Like Teen Spirit” in the background?). Which, I have to say, I would totally wear whenever.

Will I give barefoot-running a try? Hmmm. I’m doing good to train the “regular” way for the Rockledge Rumble. But who knows? I might just get a wild hair soon and accidentally-on-purpose forget my over-protecting shoes.

RunOn in Dallas holds group runs every Wednesday evening, so guess where I went tonight? Best part of all: When I told Brian about it the other day, he said he wanted to do it with me. And he did! Everyone’s at different paces, of course, but everyone was cool as cucumbers, laid-back and friendly. A 19-year-old SMU student who works at the store stuck with us the whole four miles. Alex, I think was his name. So adorable! I wanted to put him in my pocket and adopt him as my little brother! He’s from Colorado and is studying computer programming. We talked and talked and talked. Bless his heart, he said he had no idea Dallas people, namely of the SMU variety, were so “um, formal” in the way they dressed — a mannerly way of saying “new-money pretentious,” heh. Nicest kid I’ve been around in a while. Brian and I are definitely buying our next pair of shoes from him (sorry, Luke’s).